Seattle, WA—After weeks of attempting to deny her affiliation with Trump’s Republican Party by misleading voters with claims of trying to make her office non-partisan, Kim Wyman finally admitted during Wednesday’s Association of Washington Business debate that she is a partisan politician. After Rep. Gael Tarleton confronted Wyman with her record of supporting Republican candidates for office who have been widely accused of voter suppression, Wyman conceded:

“I do play—and I guess play is the right word—in national elections because I’m not overseeing those elections, so yes, I did participate with my colleagues who are Republican Secretaries of State to elect some of the other Secretaries.”

“The fact that Kim Wyman describes her work as ‘playing’ with voting rights and elections at the national level is stunning. She’s playing political games while trying to dodge responsibility for the harm that she helped cause in other states—at exactly the same time she could have influenced expanded use of vote-by-mail and defended the Postal Service through this pandemic. Washington state deserves better than someone who has actively worked to spread voter suppression across the country,” said Rep. Tarleton, a national security expert with over thirty years of experience.

“I’ve been defending our democracy for decades. I’ve seen what happens when people’s voting rights are compromised, and what my opponent clearly doesn’t understand is that our democracy doesn’t work on autopilot. We have to fight for it every generation—and until Republicans like Kim Wyman stop using their power to make it harder for Americans to vote, I’ll fight every day to oppose them and restore faith in our democracy.” 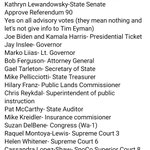